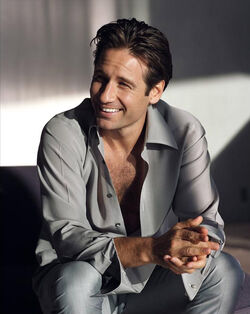 He earned an undergraduate degree from Princeton University and a graduate degree in English Literature from Yale University, which is when he began studying acting. He abandoned his doctoral studies to become a full-time actor.

Duchovny is married to actress Tea Leoni and has two children. He previously dated actress Perrey Reeves. He is also the brother of actor Daniel Duchovny.

Retrieved from "https://californication.fandom.com/wiki/David_Duchovny?oldid=3967"
Community content is available under CC-BY-SA unless otherwise noted.